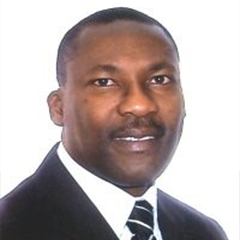 Dr Emmanuel Imevbore is a certified Leadership Coach, with more than 20 years of experience in working with leaders, teams and organisations. His unique coaching style, which supports individuals to discover and leverage their uniqueness is based on his “STEP UP” (Strategy, Thought, Energy and Passion) coaching model. He has successfully adapted this model to help move both established and aspiring leaders move forward, as they set and achieve goals more confidently and purposefully.

Dr. Imevbore was formerly a university lecturer and researcher for six years, after obtaining his Doctorate Degree in 1990. He thereafter became a director of companies and consultant/adviser to several private and public sector operators across Africa. This experience, especially the benefit of serving as a Director of a South African State Owned Enterprise (SOE) facilitated his greater interest leadership coaching. He thus received his training as a leadership and organisational coach in 1999 and 2003 under the UK-based Quantum Organisation and Institute of Neuro-Semantics Africa (INSAfrica) respectively.

Dr Imevbore is the Co-Founder and CEO of International Coaching and Mentoring Institute (ICMI), a provider of specialist coaching and coach-training solutions operating in four countries. He is also the Lead Executive Coach in the ongoing GCE Leadership Coaching Programme of Transnet Group. In this role, he is tasked with the responsibility of guiding and facilitating the coaching and mentoring process of ‘blueprinting’ new leadership culture and cadre for Transnet Group.

He is similarly engaged as a coach in several countries, notably Namibia, where he has been engaged in a leadership coaching programme with Dundee Precious Metals (DPMT) since June 2017. Other countries where he has offered specialist coaching services include Nigeria, United Kingdom, Kenya and Ghana, among others.

His leadership coaching experience across different industry has enabled him to develop the “Limitless Leadership Programme”, a specialist One-on-One and Group Coaching intervention that builds agile leadership and high performance teams. The focus is on Leadership Core; Leadership Credibility; Leadership Capacity; and Leadership Connections. The results are evident in improved communications, conflict management, credibility, care, courage and consistency, as leaders are supported to lead with purpose, pride, passion and precision.

Dr Imevbore is the author of several books on business development, impact coaching and effective leadership. Among the most prominent of his books are: Business Intelligence; Ten Major Problems that Cripple Businesses; Going for Gold; Turning Talents to Treasures; Leadership Influence; and Wealth Creation.

INTERNATIONAL COACHING AND MENTORING INSTITUTE (ICMI) is a provider of top quality coaching, coach-training and mentoring solutions, as well as related skills development and support services.